“WE ARE NOT AFRAID OF DONALD TRUMP” chanted the protesters of the great Women’s March of 2018. Yet the recent news gives all the reasons to tremble: in recent weeks the fundamental rights of women are again threatened via the right to abortion.

An icy climate on the rights of women …

From Alabama to Georgia, Texas or Missouri, there are 300 new rules on abortion in the United States since January 2019. If the United States have never been the best students in this Regarding the effectiveness of women’s rights, today, it takes a new turn: they recede. Despite the many recent struggles (Women’s March, #MeToo movement, …), the leaders of the conservative states prove that nothing is acquired and gradually establish a masculinist climate by adopting rules that were not so restrictive in regarding abortion (abortion) since its official authorization in 1973.

In Alabama, 25 white men in their 50s decided the fate of women’s bodies during an unwanted pregnancy, without exception, even in cases of rape or incest. Abortion is presented as a “danger to the mother” but the consequences would be disastrous if the law passed: it is the techniques to make it possible if it is illegal that represent a real danger to the health of women. Every woman who would like to have an abortion would be considered a criminal because the act would be considered a homicide. In the same way, a doctor who practices abortion would be liable to 99 years in prison. Some states go even further: in Texas, abortion can lead to the death penalty. What may seem rather paradoxical for governments claiming to be “pro-life” when they make these decisions on abortion … The President of the United States, Donald Trump, also does not hesitate to openly affirm that he is “Opposed to abortion”.

A wave of outrage seized the social networks and the streets, resuming a cult phrase of the character Rachel in the series Friends: “no uterus, no opinion! As well as a simple and strong message “men should not make laws on the bodies of women”. 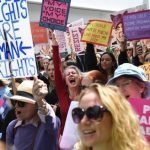 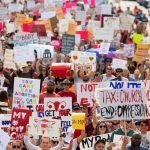 Thousands of people protested Sunday in the streets of several cities in Alabama, USA, against the adoption of the country’s most restrictive law on abortion. | MICHAEL SPOONEYBARGER / REUTERS

One month later, what advancements?

At this stage these laws have only been proposed by the federal states. They are still under consideration in the Supreme Court, which has the possibility of judging them unconstitutional (because in contradiction with the decision Roe v. Wade of 1973) and to invalidate them. Even though five of the nine judges of the court are conservative and “pro-life”, all hope is not lost.

There are also voices to protect the rights of women: In Illinois, Governor J. B. Pritzer signed a bill on June 13, 2019 to protect reproductive rights. The Reproductive Health Act states that being able to “make decisions anonymously for one’s own reproductive health” is a fundamental right.

Nevertheless, the media craze around these archaic legislative proposals is detrimental to women who are criminalized and made guilty by the public for the simple fact of wanting to have their own body. The war between pro-life and pro-choice is becoming more and more virulent. In front of the few abortion clinics still in existence, the two bodies of volunteers keep on fighting each other: pro-choice attempts to accompany women to the inside, pro-life stuck in front of the entrance trying to deter them through photos and guilt slogans.

The United States, self-proclaimed “leader of the free world”, is affected by a decline in women’s rights and their place in society. But nothing is gained in France either: as noted by Marlène Schiappa, abortion is “in danger everywhere” since in July 2018, the National Assembly rejected the registration of the right to abortion in the Constitution …

Education to respect in music with Angèle

This error message is only visible to WordPress admins